I had to run an errand up in Marysville, MT today, so hopped on my wife's WR250R (I had left on mine, but immediately had a flat tire so swapped bikes and away I went). While up there, I took the opportunity to see how far up Ottowa Gulch the road was open. Only a bit further than where a buddy had gotten a few days ago. They are doing a lot of work on the roads, as they do every year, with backhoes and big trucks hauling out fill, fixing culverts and basically getting started on the annual maintenance of all the mountain roads and trails. I didn't make it too far, but far enough for some pics.

Still lots of snow up there. If you didn't know they were there, one wouldn't have been able to pick out where the other trails, that branch off of Ottowa Gulch, were located. Deep snow.

Cornices up on one of the ridges.

Since it was so warm today, even up there, the ditches were streams of muddy runoff.

They were doing a great job of ensuring the water flowed into, and remained in, the ditches rather than running down the roads and washing them out. There is still a lot of snow melt run-off in the future, so always good to see them up there shaping things to handle it.

- Utensil Sculpture with an interesting shadow

Shadow Sculpture "Lunch with a Helmet On" by Shigeo Fukuda from SHADOWMESSENGER on Vimeo.

- Short ride to the snowline

It did turn out to be a perfect Saturday ride. ADVrider's 'Turnenem' and I planned on a 9AM meetup, but after listening to the rain downpour from 5AM - 7AM, I figured we'd have to bag it. An hour later, the sky opened up and the birds began to sing (as they say in the movies). More importantly, the radar indicated the rain was over.

We met up at 9AM on Grizzly Gulch and headed southbound. The roads were perfect; tacky and no dust. Followed Grizzly Gulch to Lump Gulch to Corral Gulch. The observant will, by now, have realized we have no shortage of Gulches around here...and that's the way we like it.

We hit the snowline right by the Park Lake turnoff. Many of the high mountain trails won't be be snow-free until June or later. We then headed back East on Lump Gulch Rd. to Sheep Mountain and played on the trails there for a bit. Again, trails were perfect due to the rain and now drying out, but still tacky. Sun was shining, a great morning ride, and home by noon.

The mighty minis did their thing. More fun per cubic centimeter than you can throw a stick at. The steeds for the day: DR200 and WR250R.

Turnenem mugging for the camera.

Several buddies and I headed to Moab, UT. We left April 8, 2011 at 6:30PM and arrived in Moab at 6:30AM, got a quick bite to eat, then hit the trails! The first day we road until mid-afternoon. The next two days we road 10 - 12 hours a day. What a great time! This was my first trip to Moab and several of us are already looking forward to another trip on our dual sports.

This won't be a full ride report, but just a quick taste of the trip. I may do a more detailed report later. I am still working on a compilation video, but I have loaded some raw videos into youtube. They are further down this post, but one can always check out my youtube channel directly at: http://www.youtube.com/user/MrChadx1

JJM and John looking West at the inbound rain and snow as we did El Diablo trail. We didn't get rained on too bad largely because it came down as more of a sleet and then snow. Talk about a smile on your face...riding through Moab, UT in the snow. 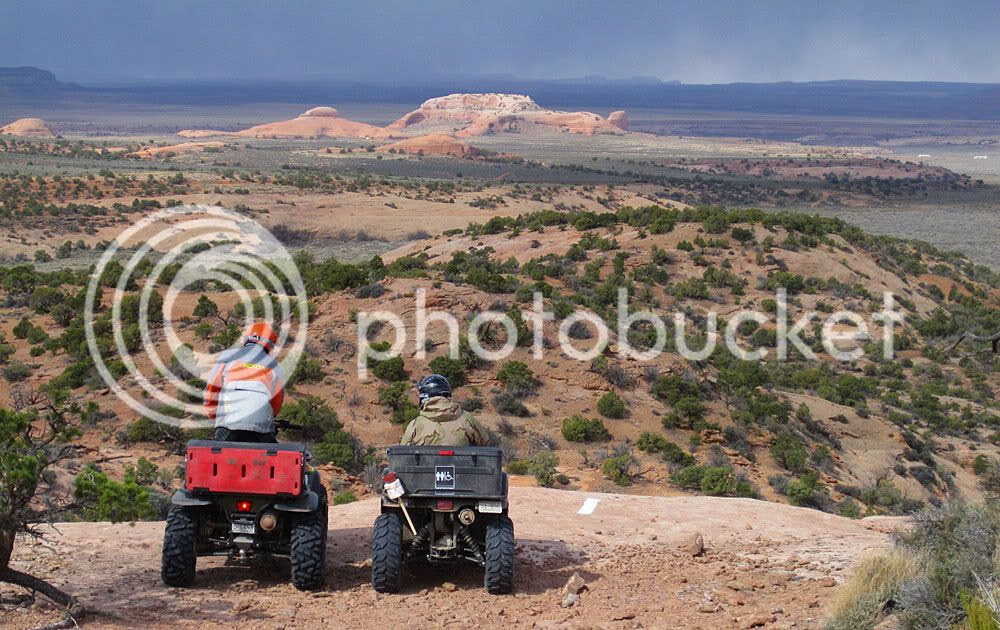 Uranium Arch off of the Determination Towers loop. 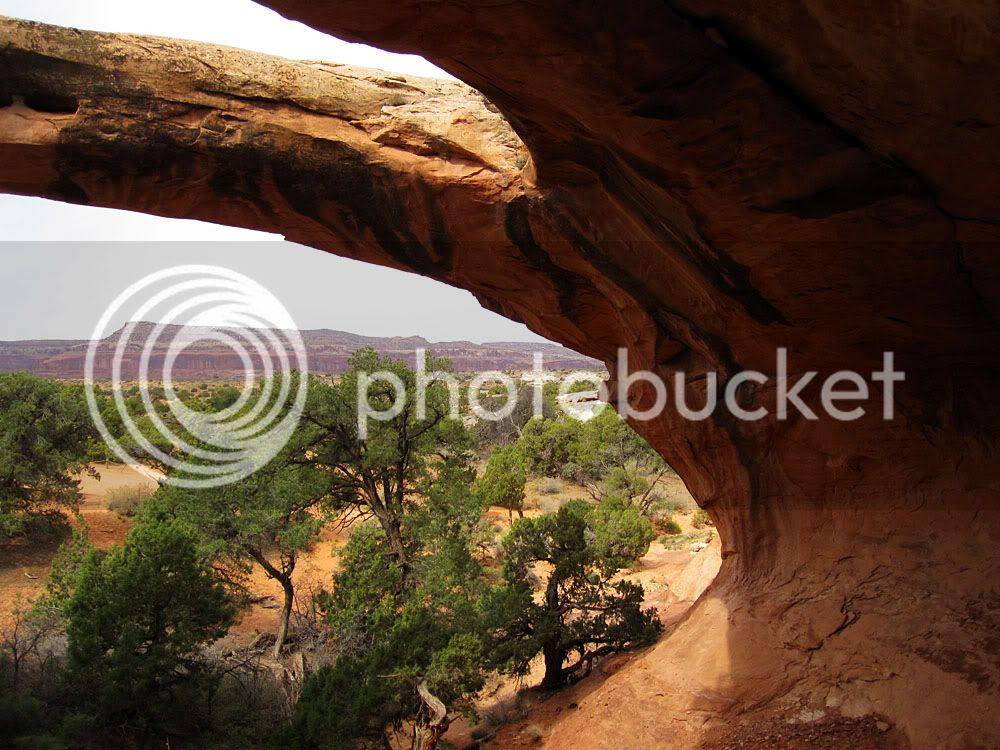 John and Clint up top. 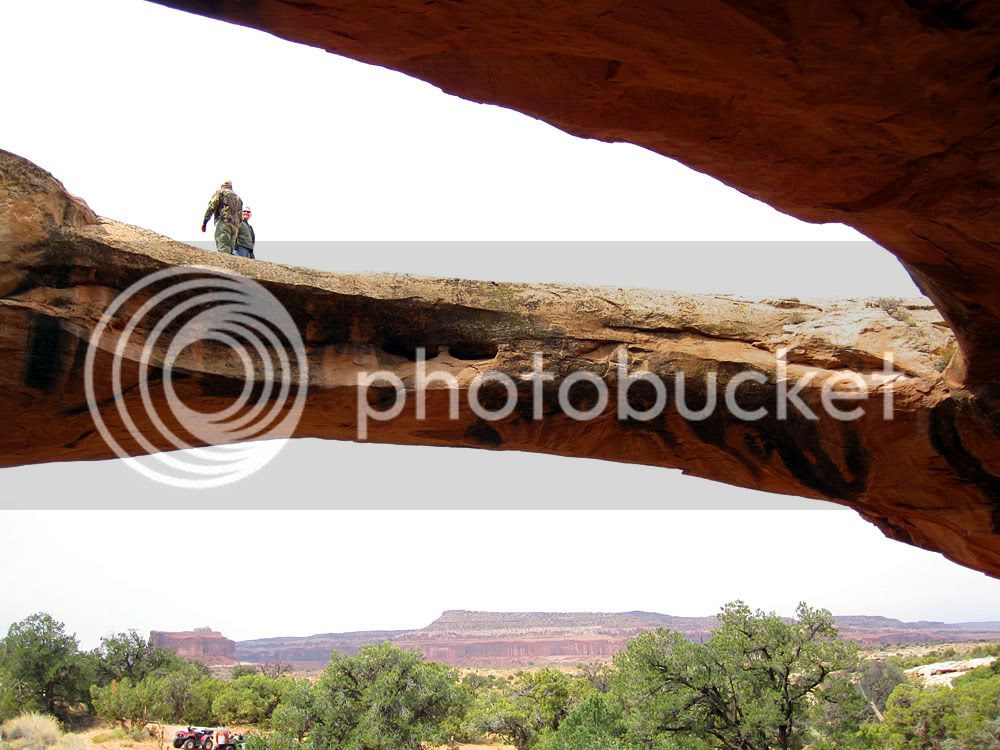 Last day. Second trail of the day. We road Kane Canyon Creek which had a lot of creek crossings (and one winching episode when a creek crossing ended short in a deep spot). 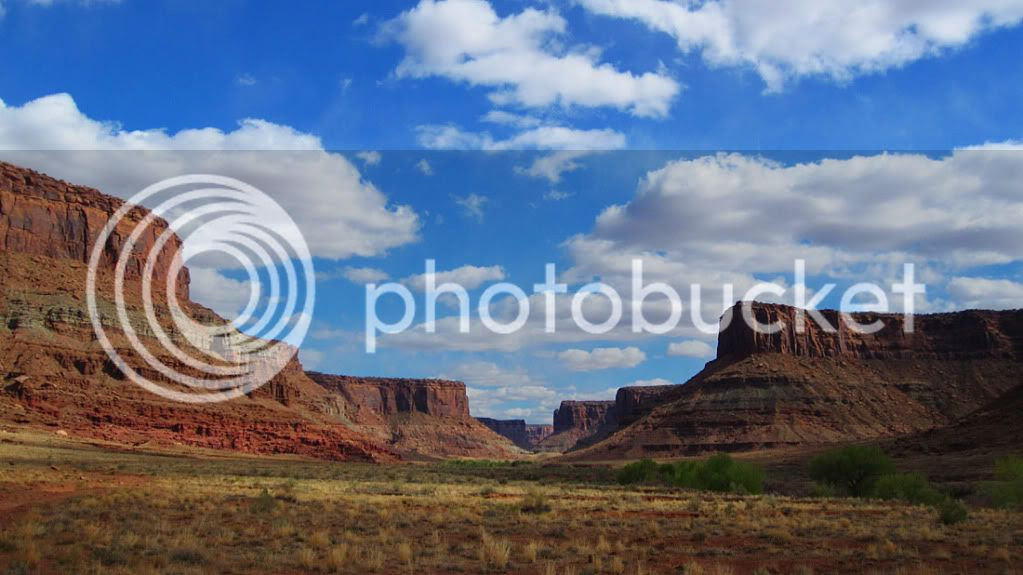 It was a great time and is highly recommended on bikes or ATVs. Next time, I would like to do it on bikes (but I would do an ATV-only trip, too, if the opportunity came up).

JJM fell into this mucky hole. Most of the creek bottom was fairly shallow and rocky and sandy, but this hole was a low spot and decomposed leaves, etc. had made a nice mucky blackwater bottom. The creek had tricked us. 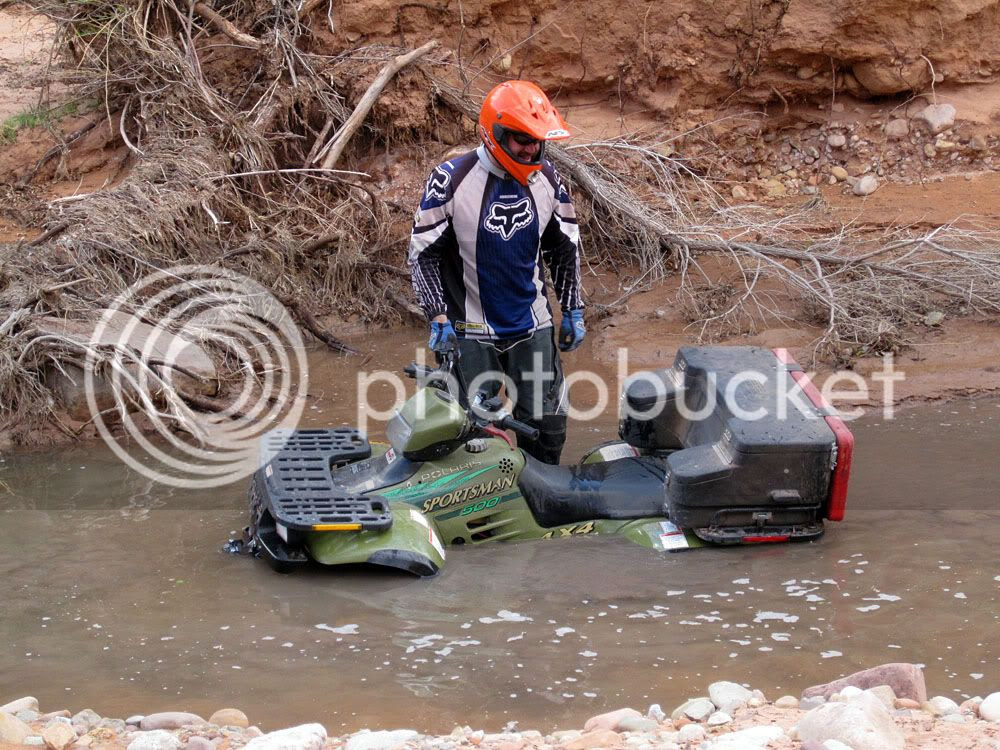 There were usually two or three possible routes as we followed Kane Creek. One on either side of the bank and one right up the creek. The trail jumped back and forth across the creek if you followed the main one and we probably crossed it about 20 or more times.

This was a fun section because we'd often split onto different trails. On the way out, we were scooting along pretty good and passed through this section right around sunset. I looked up a couple times to see someone pass me on the bank trail as I was in the creek trail. Then, around the next bend, the trails would criss-cross the creek and the other person would be in the creek or on the other bank. Fun section. 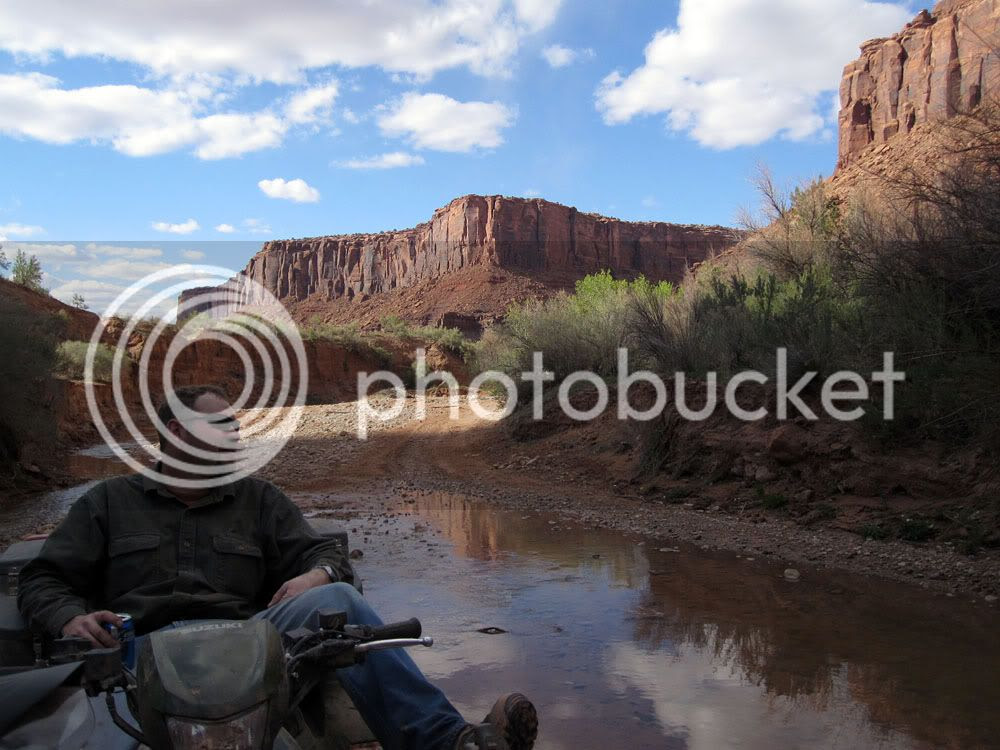 Even though it wasn't too hot out, it was nice to find a shady spot for a break. The sun was pretty intense and by this, the last, day, didn't feel the best on sunburned/windburned cheeks and necks. 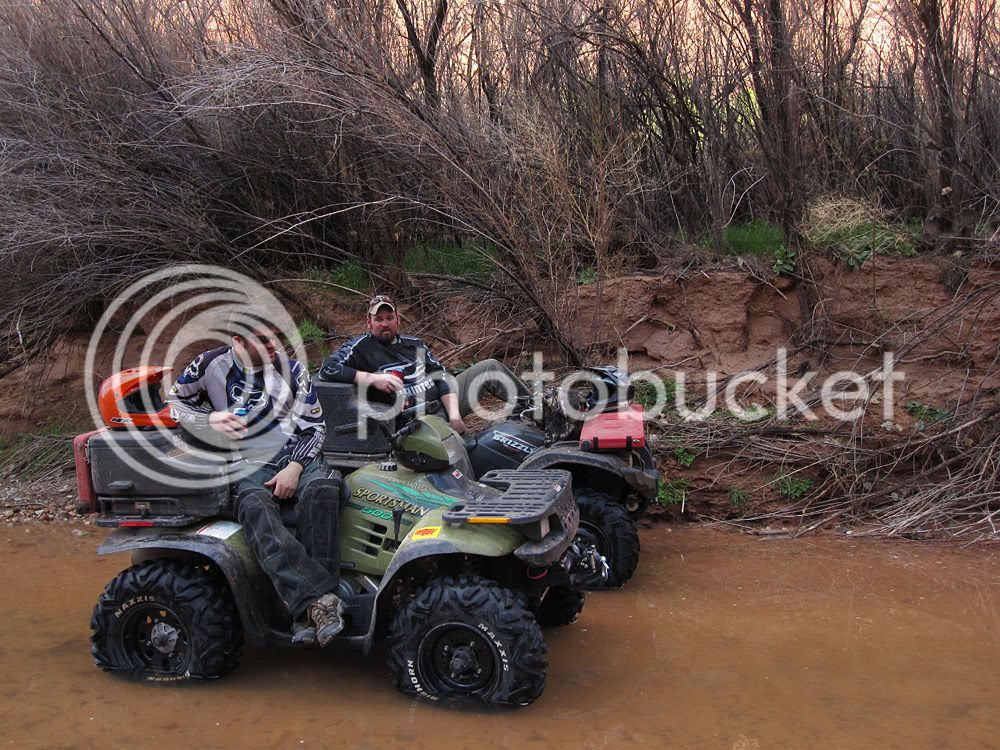 Some petroglyphs on a rock on the way to Kane Creek. I zipped right by these, but luckily everyone else saw them and stopped. We didn't see any Pictographs. Definition: Petroglyphs = scratches. Pictographs = painted. 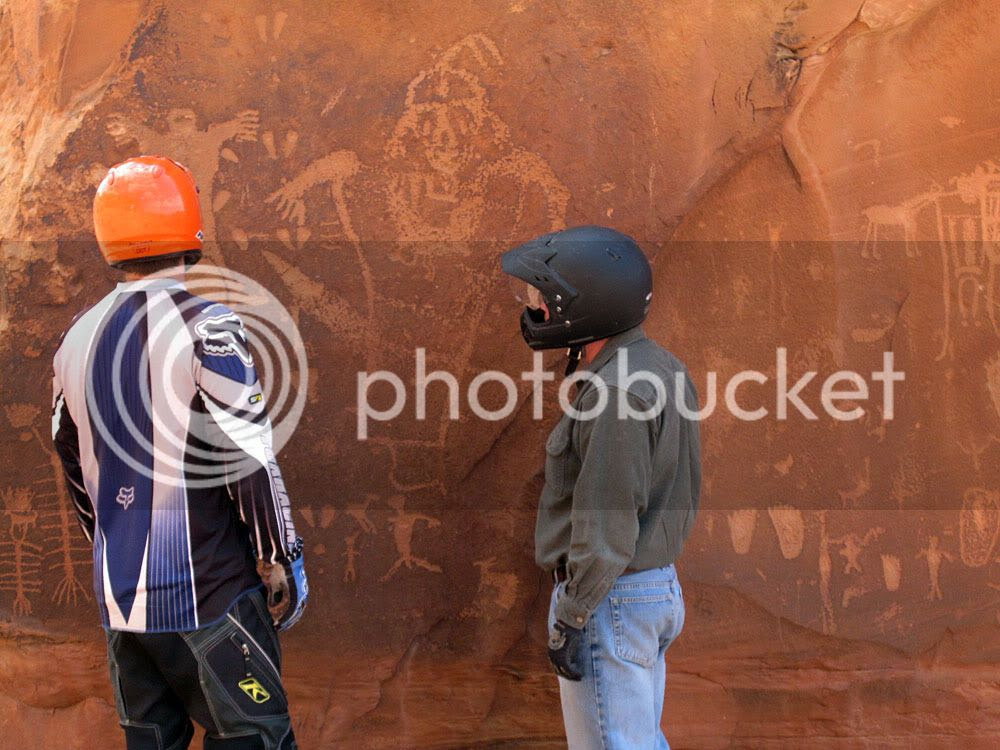 JJM then John crawling up an approach as Clint watches. It was fun to watch some bikes and jeeps do these sections, too:

Me crawling down with Clint and JJM spotting. There is a lot of traction on these rock faces and it's steep. There were a lot of sections that I would never do without spotters that can pull down a corner if you start tipping:

Watching a bike, from another group, on the same section. Note that he should be standing up on the pegs with his weight forward. Being non-aggressive only gets you in trouble on these steeps.

Me going up. I didn't winch, but JJM had a hold of my winch cable to yank the front end down if I started to go over backwards. Nice to have friends! Clint had just winched himself up the 6 foot wall directly behind me. Pics and vid of that to come.


Clint teetering on the edge: